EUPHA unreservedly condemns the invasion of Ukraine by armed forces. As a public health organisation, it notes that the invasion poses important threats to health in the immediate future and the longer term:

a) As set out in the 1986 Ottawa Charter, peace is the first prerequisite for health. The invasion has already led to unnecessary deaths among the Ukrainian people and the invading forces, including an attack on a hospital, a clear violation of the Geneva Conventions;

b) The invasion, with the inevitable displacement of people, destruction of infrastructure, and disruption of trade will have severe economic consequences for the people of Ukraine, many of whom have been living precarious lives, with obvious implications for their health;

c) The invasion is a clear threat to the democratically elected government of Ukraine. The democratic process is a means by which the health needs of a population can be turned into policies, with clear evidence that it contributes positively to health.

a) the repeated efforts by the Ukrainian government and by western leaders to prevent this act of unprovoked aggression;

b) the right, under Article 51 of the UN Charter, of the Ukrainian government to take action in self-defence.

a) An immediate cessation of hostilities, followed rapidly by a withdrawal from the territory of Ukraine, supervised by international monitors from either the United Nations or Organization for Security and Cooperation in Europe; Page 2/2

b) Respect for the Geneva Conventions, and in particular the protection of health workers and facilities;

c) Full implementation of the Minsk II agreement; and

d) Respect for the rights of those in the Russian Federation who are calling for peace.

EUPHA further stands in solidarity with its member associations in countries that may also face future threats from external aggression, and especially those in the Baltic states.

Statement by the European Public Health Association: Health is at stake in the Ukraine invasion 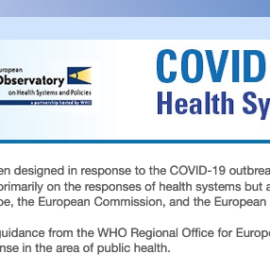 Skills for Health: Up- and re-skilling for a sustaibable recovery